You are here: Home / History of Troop 1 Sacramento

Our One Hundred of 1 Celebration, celebrating the 100 Years of Troop One produce the brochure that is linked here:

Sacramento’s Troop 1 started in 1916 and reportedly is the oldest, continuous Boy Scout Unit west of the Mississippi River. Other Scout troops were founded earlier, but none has the same unbroken record of service. Otherwise, Troop 1 is third-oldest chartered Troop in the West. 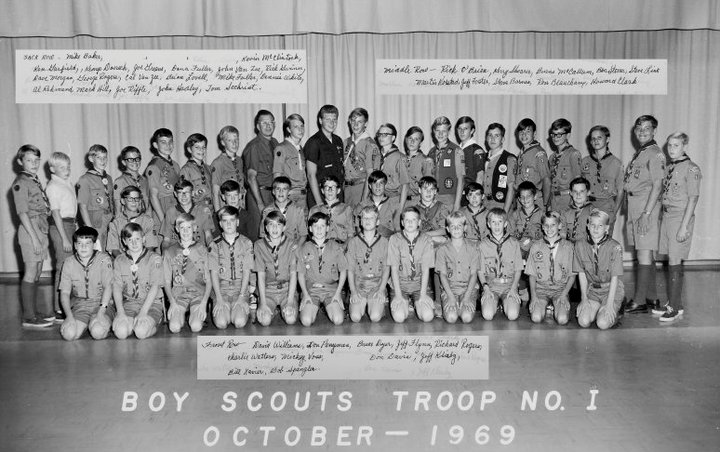 On our 70th anniversary Don Bennetts, then 84, was quoted in the Sacramento Union newspaper. He was there when the troop formed in 1916. “I don’t remember much about that first year except that the troop was all taken from a First Methodist Church Sunday school class,” said Bennetts, who was 14 at the time. “We didn’t have enough for the full 32 members, but we had three patrols, for about 24 members,” he said. “I remember we won some sort of medal for selling Liberty Bonds during World War I. It was the first medal I ever won.” Bennetts went on to become one of Troop 1’s scoutmasters. His father was also a scoutmaster in 1918.

Troop 1 was just an average unit, with a succession of short-term Scoutmasters, from it’s birth in June of 1916 in the First Methodist Church until 1929, when the church asked a deacon named Wesley Hetherington to take charge. He did — so vigorously that he is remembered as the troop’s shaping force. A burly man with a square jaw and a dazzling grin, he liked parents to call him Wally, and he got them working in the troop, but he was strict with their sons. “If you came to a meeting with unshined shoes, he sent you home to shine them, ” recalled Charles “Muddy” Watters, a Scout of that era who later became a Scoutmaster. “If you were a Patrol Leader, he made sure you ran good patrol meetings. Half the kids in town wanted to join. They took the discipline because we did things — made our own skis and snowshoes, waterproofed our tarps, baked thousands of cookies in a church kitchen and sold them to raise money. He convinced us there was nothing we couldn’t do. His enthusiasm was contagious, and lasted long after he left. A lot of scouts come back as dads because they want their sons to get what they had.”

H.J. McCurry, board chairman of the McCurry chain of camera stores in California and Nevada, and his brother Robert, company president, were Eagles under Mr. Hetherington. “Wally left about 1948,” the elder brother said. “But he was a Scouter till he died. I was assistant Scout Master and Robert was scoutmaster awhile. Nine different ex-scouts from Troop 1 have been Scoutmaster….

At Troop 1’s 60th anniversary celebration held on September 12, 1976, the McCurry’s became the first brothers in the nation to receive the DISTINGUISHED EAGLE SCOUT AWARD. The national award from the Boy Scouts of America goes to men who have held the Eagle Scout rank for more than 25 years and “continue to serve God, country and their fellow man following principles of the Scout oath and law.”

About 1946 the church asked us to meet elsewhere so it could use the room for classes. Our troop chairman retired. He’d held the job for too many years, and done too much, so there was no committee. Then the Scoutmaster quit. We had 60 Scouts but we were close to folding. A dynamic troop father, Herman T. “Bun” Silvies Jr., was a Shriner. He got Ben Ali Temple as the new chartered organization. It provided committeemen and chairmanship while he rebuilt the parents’ organization. He called fathers and briskly assigned jobs. “We do it or we quit right now,” he said.

It was slow going. In 1955 active membership shrank to nine Scouts. But Mr. Stillman “Duke” Towne, a Shriner, summoned adult ex members and 12 came as if extradited. Bob Lovell, a genial but forthright alumnus who eventually would be chairman, said, “No use belly-aching about lack of help unless we tell exactly what help we need. Let’s set up lists of duties.”

George Morrow (one of 13 eventual Troop 1 Eagles from his family) served seven years as Scoutmaster, and the troop grew again. Since then problems have been minor. Mr. Morrow is now our sponsor representative from Ben Ali Temple. “Parents and Scouts seem to give enthusiasm to each other when they’re working together,” says Morrow. “There just isn’t any obstacle a troop can’t overcome if it has a bunch of adults who know Scouting and are willing to help.” Mr. Morrow has also been head cook for 19 years at our troop run summer camp “Camp Cody”. George Morrow was awarded the NESA’s Outstanding Eagle Award in 2016, and presented to him at our 100 of 1 celebration.

The Sacramento Public Library has added Troop One records, photos, films, and memorabilia to it’s archives.

For new scouts or anyone who would like to attend a meeting can email our scoutmaster at : [email protected]

Parent Resource Survey – Please print this one-page pdf, fill in and bring to the parent meeting. (7.21.20)